In 2020, the first gloomy doom reports hit the news media that climate scientists expect a temperature rise greater than 1.5 degrees and that the rise is accelerating. This haunting news eventually culminated in fearful news surrounding the sixth IPCC report in 2021.

The IPCC indicates that in the most optimistic scenario we will reach a maximum of 1.6°C by the middle of this century, after which it will decrease through CO2 reduction techniques. In the most pessimistic scenario, we are heading for 4.4°C warming.

We fully agree that there is an enormous urgency. However, in the midst of all this doom news, something else became very clear. The uncertainty and fear of a strong temperature is caused because climate science doesn’t know how to model clouds and whether clouds have positive or negative climate feedback. This has been regularly mentioned in worrying climate studies in recent years.

For the time being, the latest IPCC report writes the following about this:

The combined effect of all climate feedback processes is to amplify the climate response to forcing (virtually certain). While major advances in the understanding of cloud processes have increased the level of confidence and decreased the uncertainty range for the cloud feedback by about 50% compared to AR5, clouds remain the largest contribution to overall uncertainty in climate feedbacks (high confidence).

On the other hand, there is an increasing amount of research demonstrating the cooling role of nature, as Princeton made clear at the beginning of August in a study ‘Planting forests may cool the planet more than thought’. 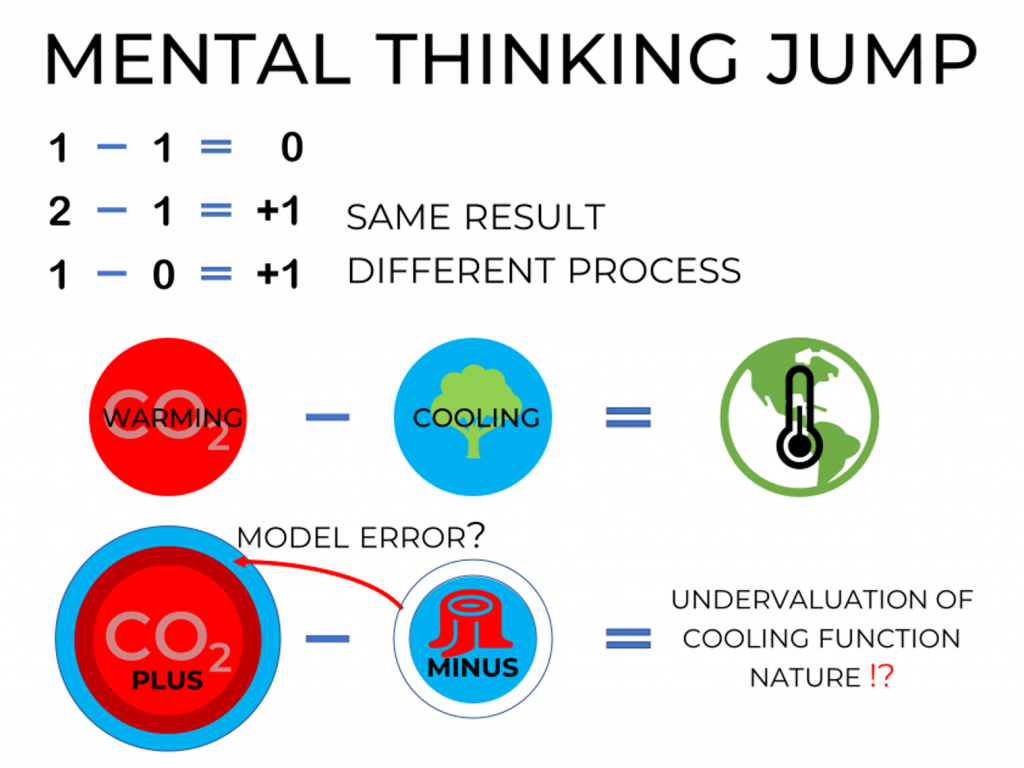 The high temperature sensitivity of the climate models to CO2 and the large degree of uncertainty in the models with regard to the expected temperature increase can, as we indicate on the homepage, be a consequence of the fact that the warming of the Earth – due to the decrease in the cooling capacity of nature – has been added up at the temperature sensitivity of CO2. This is a plausible explanation for the high degree of uncertainty and the major changes that are currently underway, which were not expected a few years ago, for the moment.

As in the past, large-scale deforestation has contributed significantly to the rise in temperature and climate change, as it has dramatically affected the ‘Green Water’ cycle and thus the Earth’s cooling capacity, see this blog article.

The fact that more and more climate science is calling the uncertainty of clouds is only good news when this cloud uncertainty is linked in the climate models to the emerging insights that high-quality forests, which are connected to oceans, are cooling. If that link fails, the bad news is not just dramatic news now, but catastrophic in the near future that we never thought possible before.

We have no time to lose and the great thing is that we don’t have to wait for long-term review cycles, but that we can create a practical free climate insurance that is also a risk-free real-time experiment. When we bring the investments in nature forward over time, we comply with the Paris Agreement on a CO2 budget, but we do benefit from the rapid recovery of the cooling capacity.

In doing so, we not only minimize our regrets, but we also maximize our chance of a livable society and that is good news.

Click here to start to see the world differently, and to understand the world through a water lens.

The Earth cools itself through the evaporation of water and reflects sunlight through the formation of clouds.

‘Green Water’ is water that is released into the atmosphere by trees and plants through their leaves, this is called evapotranspiration (like we humans sweat) and is an active process by living nature.

Evaporation of water directly by the sun where no living nature is involved, we call ‘Blue Water’ and is a passive process, we simply call this evaporation.

This definition is partly inspired by the definition of Green and Blue water definition by Garrison Sposito.